Faucets are a very important part of the water delivery system in your home, and any problems with water delivery will need immediate attention to determine if you need a quick faucet repair. 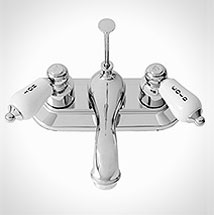 A faucet is a generic term that refers to a valve that controls the release of liquids. The physical characteristic of faucet installations that differentiate a faucet from other like valves, is the lack of any type of a mechanical thread or fastener. Most home faucet installations used for baths, showers, sinks and basins provide separate hot and cold water valves. In which case, hot and cold water from the two valves are mixed together before reaching the faucet, allowing the water to emerge at any temperature between that of the hot and cold water supplies.

When separate faucets are used, the hot water faucet generally has the color red as an indicator, while the cold water faucet has is blue or green. In English-speaking countries, the faucets are frequently also labeled with an "H" or "C". In the United States and Canada, the hot tap is on the left by building code requirements.

Frequently in faucet installation, a mixer faucet will incorporate some sort of pressure balancing feature, whereby the hot and cold mixture ratio will not be affected by changes in the pressure of one or the other of the water supplies. This helps avoid scalding or uncomfortable chilling, as when other water loads occur (such as the flushing of a toilet). Rather than two separate faucets, mixer faucets frequently use a single, more complex, valve whose handle moves up and down to control the amount of water flow and from side to side to control the temperature of the water. Especially for baths and showers, the latest designs do this using a built in thermostat. These are known as thermostatic mixing valves, or TMVs, and can be mechanical or electronic. Mixer faucets may utilize red and blue stripes or arrows to indicate which side will give hot and which cold.

Leaky faucets are just down-right annoying. Most water faucets have an adjustable flow. Turning the knob or working the lever sets the flow rate by adjusting the size of an opening within the valve assembly, giving rise to restricted flow through the narrow opening in the valve. The flow rate is independent of the temperature of the fluid in the pipe, and depends only weakly on the supply pressure, so that flow rate is stable at a given setting.

The first screw-down valve mechanisms for faucets were patented and manufactured in 1845. Many older faucets will use a soft rubber or neoprene washer which is screwed down onto a valve seat in order to stop the flow. This is called a "globe valve" and, while it gives a leak-proof seal and good fine adjustment of flow, both the rubber washer and the valve seat are subject to wear over time, so that eventually no tight seal is formed in the closed position, resulting in a leaking tap which requires some faucet repair. The washer can be replaced and the valve seat resurfaced, but globe valves are never maintenance-free. Most faucet handles on residential homes are connected to the valve shaft and fastened down with a screw. Faucets contain moving parts and they break and wear out over time.

Benjamin Franklin Plumbing College Station has skilled plumbers who can handle most faucet repair, faucet installation or faucet replacement - whether it is part of a kitchen sink, bathroom sink, bathtub, shower, wet bar, laundry room, water shut-off valve or even an attachment for an outdoor hose. Give us a call and allow us to meet your plumbing needs.